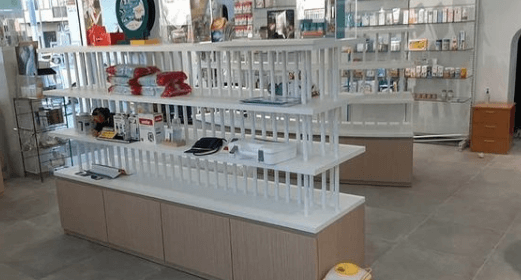 n the current post we show the work done by our company during the third week of January. We have developed customised furniture for a pharmacy and several desks for study in a library.

Assembly carried out in a Pharmacy

We begin by showing the work done for a pharmacy in Terrassa. For this work we have developed different types of commercial furniture. Achieving a furniture adapted to the needs of the same. This reform has allowed us to create a pharmacy with an avant-garde style and adapted to the trends of the sector.

Thanks to this furniture and the refurbishment, the pharmacy has managed to create a style that will attract the attention of its customers. Making the most of all the space available, thanks to the made-to-measure furniture. Designed especially for this establishment. The first element that we have developed has been the shelves on the walls of the pharmacy. Creating the necessary shelves to fill all the walls of the pharmacy, achieving a space that follows a line of style throughout the premises.

The next element was the pharmacy counters. Creating mini counters, for each worker. This allows more free space between them. Offering more space for sales and that customers can move more easily between them.

Finally, we have developed the shelves located in the centre of the pharmacy. To gain space to display the pharmacy’s products. In addition, they allow to separate spaces, to create sales areas within the pharmacy.

Work done in a library

The second job done last week was a number of innovative and contemporary desks for a library. Thanks to the large format desks developed for the library, students will be able to study and/or read while looking outside the library. This will allow them to enjoy the scenery. These desks are rectangular in shape, with two legs, chargers and led lights for each study area.

In these images you can see how these desks allow you to use this space in the library. Achieving a study place different from the traditional library desks.

Angle Exhibits have offered our clients a professional service. To create the commercial and retail furniture they wanted and tailored to their needs. As specialists in the design and construction of stands, we have acquired a great deal of experience in creating bespoke furniture for all types of spaces. If you would like to know more about our services, contact us, we will inform you without obligation. Visit our Instagram and Facebook to see our work.